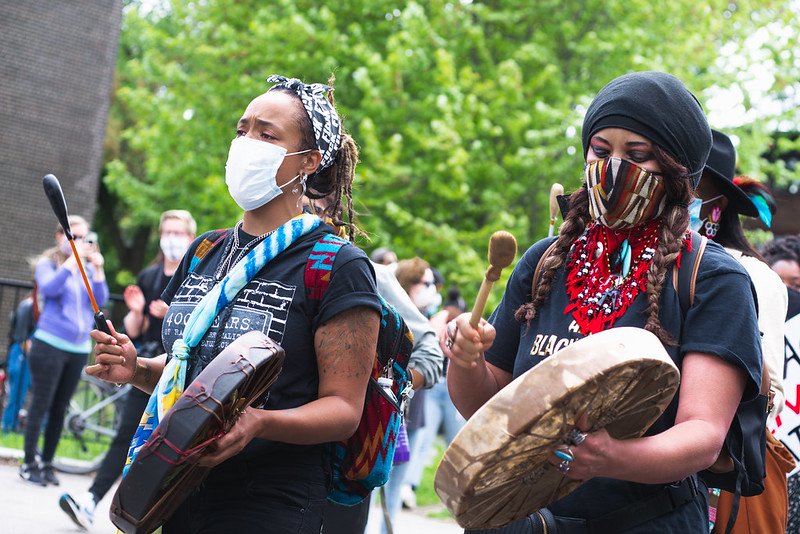 The Arc/k Project feels extremely strongly in support of the Black Lives Matter movement. We are also wanting to do a lot of great soul-searching in a field that we realize is already clamoring with people very superficially treating the subject.  We began by becoming aware of the origins, and considering how pervasive, subtle in some instances, and ultimately super toxic systemic racism, white supremacy and systemic neglect can be in altering histories, thus cancelling out futures.

As we share our reflections on the 2020 global uprisings in defense of Black lives against police brutality, we begin by acknowledging its origins. The Howard University Law Library states: “In 2013, three female Black organizers — Alicia Garza, Patrisse Cullors, and Opal Tometi — created a Black-centered political will and movement building project called Black Lives Matter. Black Lives Matter began with a social media hashtag, #BlackLivesMatter, after the acquittal of George Zimmerman in the shooting death of Trayvon Martin back in 2012. The movement grew nationally in 2014 after the deaths of Michael Brown in Missouri and Eric Garner in New York. Since then it has established itself as a worldwide movement, particularly after the death of George Floyd at the hands of police in Minneapolis, MN.  Most recently, Black Lives Matter has spearheaded demonstrations worldwide protesting police brutality and systematic racism that overwhelmingly affects the Black community.”

The Black Lives Matter website asserts:
“#BlackLivesMatter was founded in 2013 in response to the acquittal of Trayvon Martin’s murderer. Black Lives Matter Global Network Foundation, Inc. is a global organization in the US, UK, and Canada, whose mission is to eradicate white supremacy and build local power to intervene in violence inflicted on Black communities by the state and vigilantes. By combating and countering acts of violence, creating space for Black imagination and innovation, and centering Black joy, we are winning immediate improvements in our lives.

We are expansive. We are a collective of liberators who believe in an inclusive and spacious movement. We also believe that in order to win and bring as many people with us along the way, we must move beyond the narrow nationalism that is all too prevalent in Black communities. We must ensure we are building a movement that brings all of us to the front.

We affirm the lives of Black queer and trans folks, disabled folks, undocumented folks, folks with records, women, and all Black lives along the gender spectrum. Our network centers those who have been marginalized within Black liberation movements.

We are working for a world where Black lives are no longer systematically targeted for demise.

We affirm our humanity, our contributions to this society, and our resilience in the face of deadly oppression.

The call for Black lives to matter is a rallying cry for ALL Black lives striving for liberation.”

We affirm Black lives matter, Black histories matter, Black futures matter. In the wake of the acts of police violence against George Floyd, Breonna Taylor, Ahmaud Arbery, Jacob Blake, and the countless acts of violence against Black Americans that occur daily, we are in solidarity with those who mourn and those who protest and organize for justice and reform. We are committed to making justice a priority in our work to digitally conserve and protect humanity’s collective culture and history. As an activist archiving organization, we believe in the power of learning from our history in order to cultivate wisdom and inspiration for our future generations. Our community-driven, citizen science based approach seeks to empower communities so each person may access tools and training to preserve the stories and heritage which are meaningful to them.

Archiving is not neutral.
The Society of American Archivists Council states this well on behalf of the field of archiving:

“During this time of dramatic and traumatic historical significance, the Society of American Archivists remains committed to its core organizational value of social responsibility, including equity and safety for Black archives workers and archives of Black Lives. A truly open, inclusive, and collaborative environment for all members of the Society cannot exist without justice for those affected by anti-Black violence. We acknowledge the trauma Black archives workers face, in particular. The labor of dismantling white supremacy and structural racism in archives, and beyond, does not rest solely upon our Black membership and other people of color. White archivists, who comprise a vast majority of the field, have a responsibility to disavow racism daily in society and in our profession.” 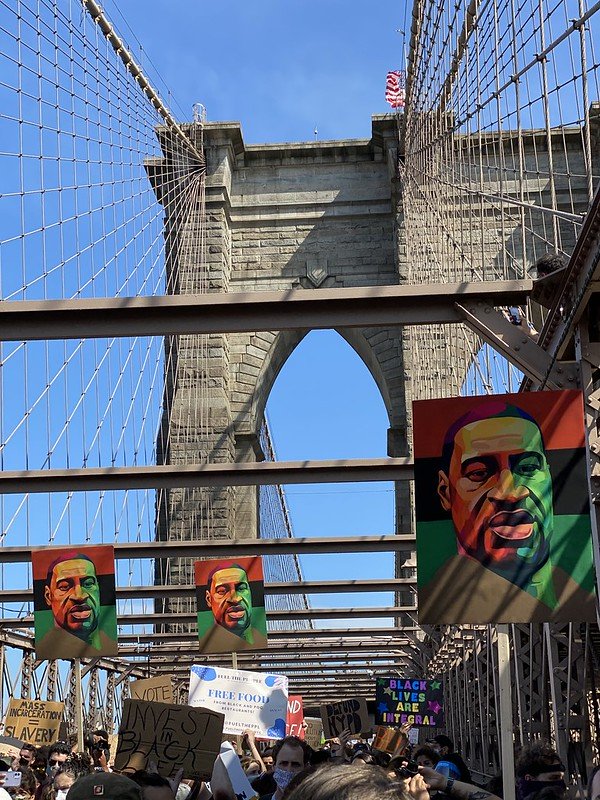 Uprisings Affect Changes in Policy and Powerholders
The New York Times accounts some of the significant changes as a result of the uprisings, which featured the participation of about 15 million to 26 million people in the United States. “In Minneapolis, the City Council pledged to dismantle its police department. In New York, lawmakers repealed a law that kept police disciplinary records secret. Cities and states across the country passed new laws banning chokeholds.” The vast majority of the thousands of Black Lives Matter protests were peaceful, with more than 93% involving no serious harm to people or damage to property, according to a report by Armed Conflict Location and Event Data (Acled) project, which tracks political violence in the United States. But the US government has taken a “heavy-handed approach” to the demonstrations, with authorities using force “more often than not” when they are present, the report found. And there has been a troubling trend of violence and armed intimidation by individual actors, including dozens of car-ramming attacks targeting demonstrators across the country.  In the November 2020 U.S. Presidential election, Joe Biden was elected the 46th President of the United States. 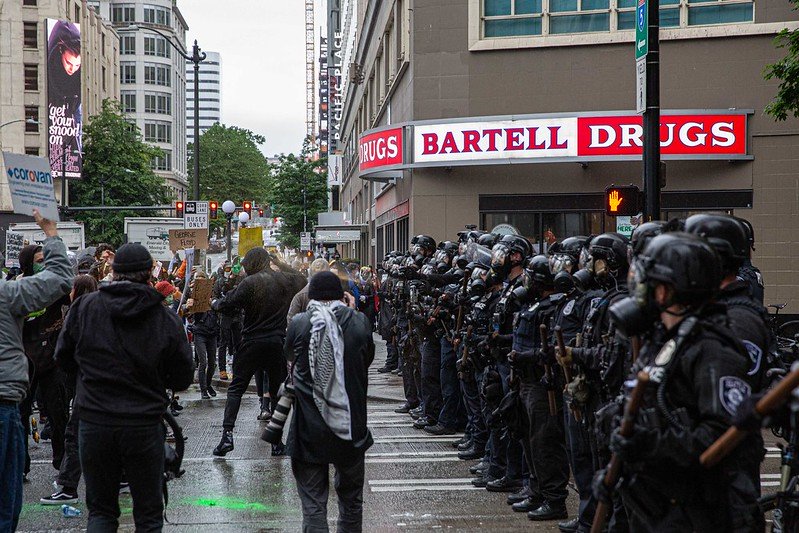 Public Health Crisis
Unrest over police brutality and racist violence erupted at the height of another crisis: the COVID-19 pandemic, which drastically disrupted the socio-economic environment. These inequities disproportionately impact Black Americans. According to the Brookings Institution, COVID-19 has now become the third largest cause of death amongst the Black population. This year has been especially challenging for vulnerable populations at risk in the multiple crises of public health and public safety. The Arc/k Project responded to the global coronavirus pandemic with 3D printing PPE face shields and giving donations of PPE resources to frontline workers and to communities in need. 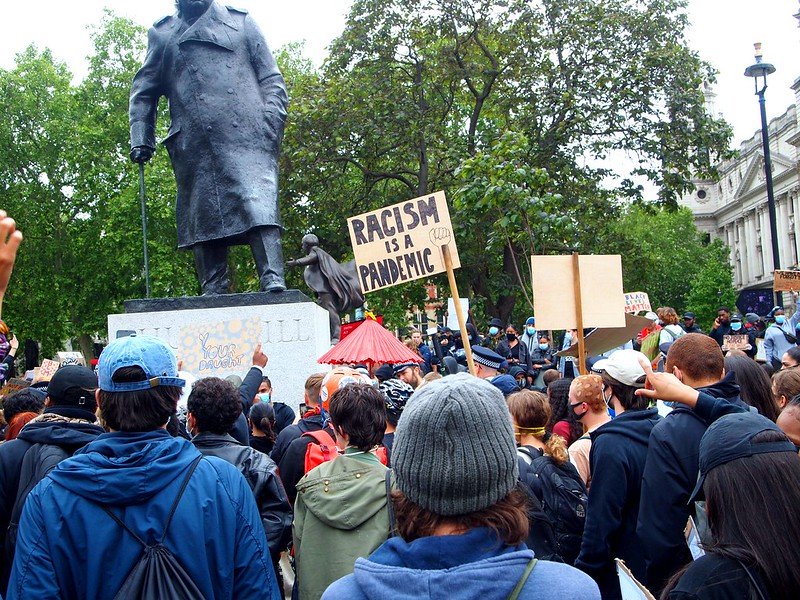 A pillar of our work is to destabilize a top-down paradigm. By democratizing the art and science of digital preservation, we shift the power from select authorities into the hands of diverse people in age, class, nationality, race, ethnicity, religion and gender.  The variety of voices unsettles the limited historical narratives, and amplifies dynamic and ever evolving histories and legacies. 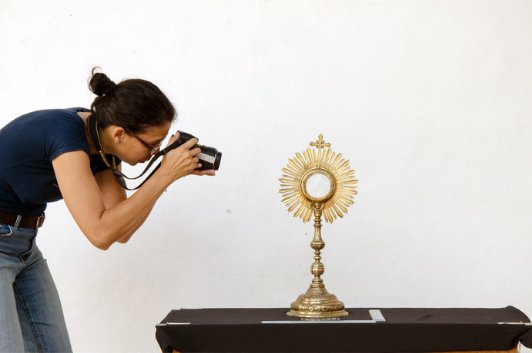 Image: Photographer at a museum as part of The Arc/k Project’s community-driven initiative of Preserving Venezuelan Culture Digitally.

We must document, remember, and archive these significant times and amplify the historic contributions by Black Americans. We are proud to support a free educational Augmented Reality app Reach Across the Stars with our 3D model assets. The project is being produced in conjunction with Kimberly Arcand and her team from NASA’s Chandra Observatory and was funded as part of the Smithsonian’s Because of Her Story Initiative. The app uses AR to share the stories of female science heroes and is aimed at reaching middle school girls to promote an interest in STEM careers. We are delighted to provide our 3D model of a USA Space Suit to be integrated with the profile of Jessica Watkins, a Black American NASA astronaut, geologist, aquanaut and former international rugby player.

We have absolute confidence that the work we have been doing in the last five years in democratizing cultural heritage archiving is on the right track but we are also constantly re-examining what we are doing, and we want to do more. In contextualizing this movement, which we hope will always be powerful, in the specifics of our field, we are committed to an ongoing discussion about how we can contribute more and affect this dialogue more. This conversation isn’t over. And we are not satisfied that we have all the answers. But we are actively asking this question, and it will definitely inform our future projects even more.

Learn more from these resources:

Radical Archive: Preserving Protest Ephemera
Webinar featuring: Rachel Rivenc, the head of conservation at Getty Research Institute, Shannon A. Brogdon-Grantham, the photograph and paper conservator for the Smithsonian’s Museum Conservation Institute; Carol A. Wells, a founder and creative director of the Center for the Study of Political Graphics; and Tyree Boyd-Pates, the associate curator of Western history at the Autry Museum of the American West.
Radical Archive: Preserving Protest Ephemera.

Showing Up For Racial Justice

People’s Institute for Survival and Beyond